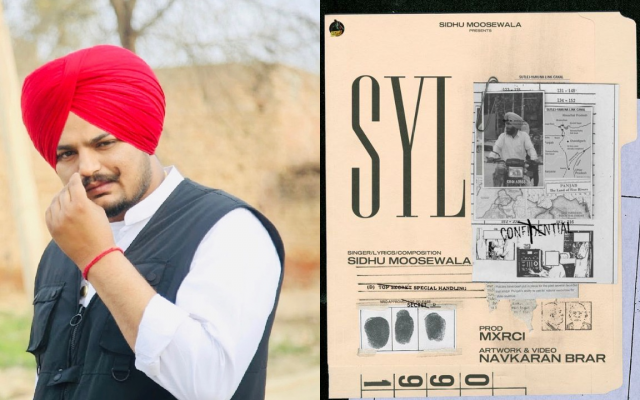 Today the much-anticipated song SYL written, composed, and sang by Sidhu Moosewala was released. The release comes just days after a leaked low-quality teaser went viral. SYL refers to the Sutlej-Yamuna Link canal which was proposed in 1982 to carry Punjab’s river water to neighboring Haryana. Despite the democratic protest of Punjab’s people, construction of the project began over the next few years. The project was an attempt to cripple Punjab economically and ecologically by diverting Punjab’s river water.

The song was surrounded by controversy even prior to its release. Amongst the politicians against the release of the song was Punjabi singer turned politician Hans Raj Hans. Despite such attempts to prevent the song’s release, it was released sooner than expected.

Sidhu Moosewala is known to collaborate primarily with music producers Big Byrd and more recently The Kidd, however, this track is produced by a lesser-known producer that goes by Mxrci (pronounced mercy). The artwork and video were done by Navkaran Brar.

The song starts by addressing the Indian government with the demand to return Haryana and Himachal Pradesh back to Punjab. This is a reference to Haryana and Himachal Pradesh being carved out as new states from Punjab on November 1, 1966 and January 25, 1971 respectively on the basis of language. Punjabi-speaking Hindus discriminately declared their mother tongue Hindi at the urging of Hindu-owned newspapers.

The next verse assertively states that Punjab will not provide a drop of water let alone access to its rivers until a path to sovereignty is given to Punjab. Video footage of Balbir Singh Bharpur giving a speech with Bhai Amrik Singh in attendance is shown followed by scenes of mass protesters.

The verse that follows demands the release of Sikh prisoners. The issue of Sikh prisoners first gained mainstream attention as a result of Gurbaksh Singh Khalsa’s hunger strike in 2013. Sikh Prisoners that dedicated their lives to the Sikh liberation movement are still being held in custody by the Indian government despite having served their life sentences.

In the next verse Sidhu Moosewala states that despite all the attempts of the Indian government to assimilate Punjab, Punjab will not be subjugated. He then declares that he shall continue to write the truth and if the government does not refrain the likes of Balwinder Singh Jatana shall return. Balwinder Singh Jatana was a Sikh freedom fighter who along with his companions assassinated the chief engineer and superintendent engineers for the project on July 23, 1990, after peaceful protests proved ineffective. The government was shaken by the audacity of the action and immediately halted the SYL project

The song ends with an audio clip of Satya Pal Malik, Governor of Meghalaya, which went viral during the farmer’s protest. It narrates the tendency of Sikhs to seek revenge for the injustices perpetrated against them and cautions the audience against testing the patience of the Sikhs. He references the assassinations of Indira Gandhi and General AS Vaidya in retaliation for Operation Bluestar and Michael O’Dwyer for the Jallianwala Bagh massacre in 1919.

Not only did the team behind this project do an amazing job creatively but they dared to touch on the topics of sovereignty for Punjab, Sikh prisoners, water rights, and more without fear of the repercussions. While listening to this song I experienced a series of emotions, most prominent was the loss of Sidhu Moosewala which now seems to ultimately be a loss for the Sikh youth that were just on the cusp of gaining a creative, well-read, and courageous role model that had strong Sikh sentiments.

We have legally purchased this song to support such projects and also Sidhu Moosewalas parents – we encourage you to do the same.