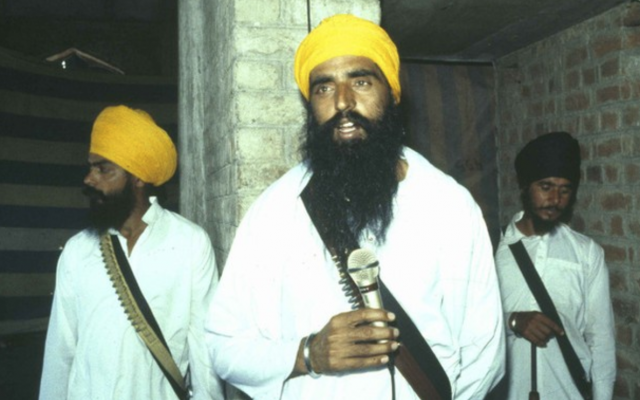 Sant Jarnail Singh Bhindranwale went from village to village as a religious missionary preaching Sikhism. He asked them to live according to the rules and tenets of Sikhism. He would give long speeches and encourage numerous youths to take Amrit, the holy nectar. Bhindranwale preached to young Sikh men who had lost their path, encouraging them to return to his path of Khalsa by giving up vices like sex, drugs, addictions, etc. His focus on fighting for some cause made him a hero in the eyes of young Sikhs. The successor to Gurbachan Singh Khalsa, Kartar Singh Khalsa, who died in a road accident on August 16, 1977, mentioned Bhindranwale as being the new leader of the Damdami Taksal.[1] Bhindranwale was formally elected at a bhog ceremony at Mehta Chowk on August 25, 1977.

Bhindranwale was widely perceived to be a supporter for the creation of a proposed Sikhism-based theocratic state of Khalistan. However, in a BBC interview, he stated that if the government agreed to the creation of such a state, he would not refuse. Other quotes attributed to Bhindranwale include “we are not in favour of Khalistan nor are we against it”. Responding to the formation of Khalistan he is quoted as saying, “We won’t reject it. We shall not repeat 1947.” To which he added, “if the Indian Government invaded the Darbar Sahib complex, the foundation for an independent Sikh state will have been laid.”

On April 13, 1978, a few Amritdhari Sikhs of Akhand Kirtani Jatha went to protest against Nirankaris. The confrontation led to the murder of thirteen members of the Akhand Kirtani Jatha and three members of the Nirankaris. The victims were implicated. This infuriated many Sikhs further. On April 24, 1980, the leader of Nirankaris, Baba Gurbachan Singh Nirankari, was assassinated. The FIR named nearly twenty people involved in the murder, most of whom had ties to Bhindranwale. Bhindranwale was subsequently implicated in ordering the assassination. A member of the Akhand Kirtani Jatha, Ranjit Singh, surrendered to committing the assassination three years later, and was sentenced to serve thirteen years at the Tihar Jail. Bhindranwale was later aquitted of all charges.

On September 9, 1981, Jagat Narain, the proprietor of the Hind Samachar Group, was shot dead near the Amaltas Motel. Jagat Narain was a prominent opponent of Bhindranwale.He was present during the clash that occurred between Nirankaris and Akhand Kirtni Jatha Members, and stood witness at the Karnal Trial, in favour of the accused. Two days after the assassination, police issued warrants for the arrest of Bhindranwale. Bhindranwale publicly announced that he would surrender on September 20. On September 20, 1981, Bhindranwale surrendered to the police at a function held in a Gurudwara Gurdarshan Parkash. Over the next twenty-five days while Bhindranwale was held in custody, sporadic fights erupted in areas where Bhindranwale’s accomplices had gathered. Bhindranwale was released on bail on October 15 as India’s Home Minister, Giani Zail Singh announced in the Parliament that there was no evidence against Bhindrawale.

On June 3, 1984 Indian Prime Minister Indira Gandhi initiated Operation Blue Star and ordered the Indian Army to attack the Golden Temple complex. It was widely reported that Bhindranwale did not survive the operation and is thus regarded as a martyr by some Sikhs.

People who maintain that he survived the operation include Dilbir Singh, the Public Relations Advisor at Guru Nanak Dev University. He stated that Bhindranwale was injured on the right side of his temple. He stated, “a government doctor verified he was captured alive. He was tortured to death. R.K. Bajaj, a correspondent for Surya magazine, claimed to have seen a photograph of Bhindranwale in custody. This claim is strongly contested, especially by Bhindranwale’s son who has now become a prominent figure within Sikh politics. Some within the Damdami Taksal claimed he is still alive. However, Jarnail Singh was pronounced a martyr by the Shiromani Gurdwara Parbandhak Committee at a function in 2003.