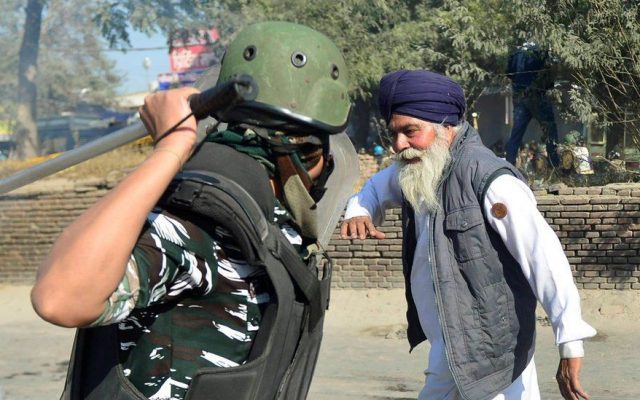 We have all been watching the coverage of the farmers protest against three new laws that were passed in September of 2020. Generally speaking the three laws put a greater emphasis on free-market trade, pricing, and storage of farm produce.

Farmers across India have collectively labeled these laws as harmful for farmers while the government’s stance is that these laws are rather beneficial for farmers. The situation has escalated to a literal standoff between farmers from across the nation and the Modi government in the capital New Delhi.

As I see this play out, I can’t help but draw the parallels between the farmers protest and the Anandpur Sahib Resolution agitation that began in the late 70s. The failed strategy that the government has adopted to thwart the protest is the same one they were successful with during the 70s and 80s.

Central to the governments strategy is the misappropriate use of the media. When the Anandpur Sahib Resolution agitation started the Indian government labeled the participants as separatists and anti-national elements.

Reading the Anandpur Sahib Resolution makes it clear that it was a proposal for farmer rights and in general to vest greater autonomy in the state to make their own laws. There was nothing in the proposal that explicitly or implicitly would suggest it was separatist in nature.

The Congress government of the time was successful with this strategy because they were able to censor the limited number of media channels or influence them to present their narrative of Sikhs being anti-national elements.

They have attempted the same strategy in 2020 and failed. The national media has alleged that this is not a farmer protest but rather a calculated attempt by Khalistanis to threaten the integrity of India behind the disguise of farmer rights.

However, the landscape in 2020 is much different from that of the 70s or 80s. While the government has a stronghold over national media, there are several independently run channels they are unable to influence. Furthermore it is impossible for them to censor all social media channels.

The field reporters for these national media channels often ask questions of an instigating nature to evoke the farmers emotion in order to gain footage that can be presented out of context. However, the farmers are also privy to this calculated attempt of the government to leverage the national media to discredit the protests.