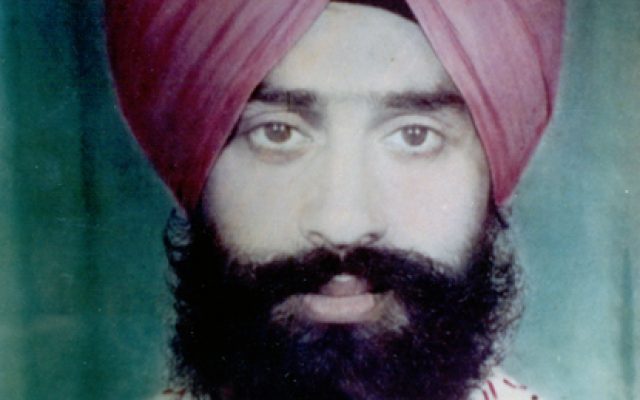 Article printed in Sikh Shahadat magazine (May 2004).
Translated by Bhai Balpreet Singh and edited by SaintSoldiers.Net

Shaheed Master Sukhwinder Singh Babbar was born on April 8, 1955 in village Daabaanvala, Batala, District Gurdaspur. His father was Sardar Bakhshish Singh and mother Bibi Jageer Kaur. Master Ji had 4 brothers and one sister. Master Ji first studied in village Aliwal and then went to Bering College Batala where he graduated and then went on to study at CPID Mohali. After graduating he took a job as a teacher in Kadeeaan. He began to be called “Master” after this point.

Master Ji, along with his worldly studies also read a lot of Gurbani. He began to do the sangat of Sant Jarnail Singh Ji Khalsa Bhindranwale and after finishing his work at the school, used to go do sangat with Sant Ji. While teaching at the school, he also began to participate in the Dharam Yudh Morcha.

The events of June 1984 broke Master Ji’s heart. He was so badly hurt that he resigned from his job and began to fight to protect the glory of the Sikhs and he never looked back again.

The police began to daily make raids at Master Ji’s home but he was never captured. Master Ji went underground and joined Babbar Khalsa and became an active member. Master Ji was of a very sweet nature and took pleasure in helping the needy and helpless. He would constantly be repeating Gurbani. He was very wise and knowledgeable as well. Master Ji was soon appointed the Jathedar of the Majha area. Master Ji used to encourage all those in the movement to certainly take their dasvandh out. After every six months Master Ji would go home a nd take the dasvandh from the crops his family had grown. Master Ji’s younger brother Rajvinder Singh once said, “our Dasvandh is already taken out because we’re almost homeless and can not even plant our crops on time.” Master Ji replied, “If Vaheguru did not even give us this much, what would we have done? Taking out dasvandh helps in profit, not harms.”

Master Ji was firm on his principles and was a true soldier. He told everyone in the Jathebandi to take out their dasvandh and consider it their duty.

Once, Master Ji went on a long trip on his bike to get RS100 in dasvandh from a Singh. A Singh in the Jatha asked Master Ji why he took such pains to go get such a small amount. Master Ji replied, “it was that Singh’s faith that he wanted to do seva and so his RS 100 is to me like a hundred thousand. On top of that, that Singh will be more attached to us now and if he was giving the dasvandh with such happiness, how could we refuse?” Master Ji served the Jathebandi with full commitment and soon he was chosen to be in the seven member High Command of Babbar Khalsa.

On the night of March 21, 1987, Master Ji came home at 12AM and was given some fruit to eat. He looked at the watch and said that it was 12 and thus Amrit vela and he would not eat now. He got up to leave again but called the entire family together first. He said that he had a very important request he sad, “A Singh can be captured or a Singh can also be martyred. If a Singh is captured, don’t go after him and if he is martyred, don’t weep. Just read as much bani as you can. Finally, when a Singh is martyred, people often give their families money to honour them. I don’t want you to even touch any money.”

After saying this, he left for his destination. No family member could say anything further to him and the entire night they wondered what the meaning was of all this.

On March 23, 1987, two days later, the family received news that Master Sukhwinder Singh Babbar had been captured. After countless tries, the family could not get any further information. The police simply said they had not caught him. Soon after, the Jathebandi commemorated his Shaheedi.