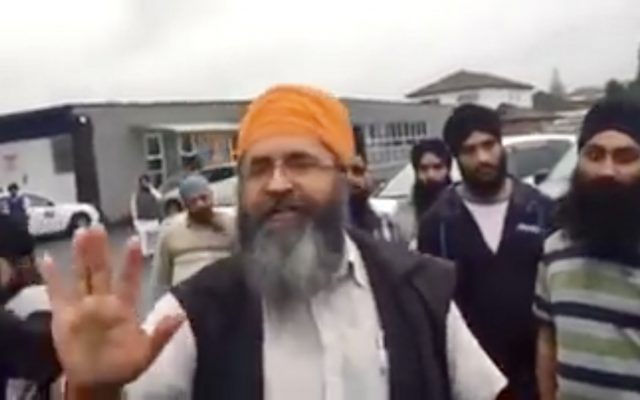 Recently we had been hearing about a controversial radio show host by the name of Harnek “Singh” Neki based out of Auckland, New Zealand. The name of the show he hosts is “Radio Virsa NZ”. We wanted to listen to his opinions firsthand to get to the bottom of the controversy surrounding him.

So we visited his Youtube channel, which at the time of this writing has over 160,000 subscribers. The fact that he has 160,000 subscriber doesn’t translate to him having an equivalent number of supporters. We suspect the vast majority of the subscribers want to keep a tab on his activities as opposed to sharing his sentiments.

We came across several clickbaity thumbnails and titles for his videos. After having gone through several of his videos we came to the conclusion that his channel “Radio Virsa NZ”, contrary to its name, has nothing to do with Sikh or Punjabi V. The vast majority of his content slanders key historical and present-day figures associated with the Damdami Taskal and the Sikh Freedom movement along with its supporters.

Neki poses as a supporter of Ranjit Singh Dhadrianwale, however, most of his opinions on Sikh history and principles do not even align with that of Dhadrianwale. We suspect this is a calculated attempt to create a further divide amongst Sikhs specifically between Dhadrianwale and Damdami Takasal supporters.

Like most Punjabi radio shows this one also revolves around listeners calling in to share their opinions on the topic of conversation. However, the host of this particular show selectively gives air time to callers who agree with his opinions. He often verbally abuses or hangs up on callers with an opposing viewpoint. His so-called radio show can hardly be described as such, it is more so a propaganda machine.

We recognize an insignificant minority of Sikhs did not agree with the Sikh Freedom movement and its participants. However Neki and his hand-picked callers have taken this to another level by making unsubstantiated allegations against the likes of Sant Jarnail Singh Bhindranwale, General Shabeg Singh, Sant Thakur Singh, Bhai Sukhdev Singh Babbar and General Labh Singh which cannot be mentioned here.

He has gone so far to make sacrilegious accusations against historical figures such as Baba Deep Singh, Bhai Randhir Singh, Sant Kartar Singh Bhindranwale whom the entire Sikh community respect and revere. This suggests that his target is not isolated to the Sikh Freedom movement. It leads us to believe there is an ulterior motive to maliciously distort Sikh history and its principles.

In the past, Sikhs in New Zealand were compelled to remove a saroop of Guru Granth Sahib from his “Gurdwara Sri Guru Singh Sabha, Papatoetoe, Auckland” to another place of worship. On June 14, 2018 he was excommunicated from the Sikh religion by Jathedar Gurbachan Singh for derogatory remarks on Sikh Gurus and for distorting Gurbani on his radio show. He was given three chances to appear before the Akal Takhat but failed to respond to each.

We as Sikhs should be aware of such individuals disguised as Sikhs who are pawns in a grander scheme to lead Sikhs astray by making them susceptible to self-doubt. We should have an immense amount of pride and confidence in our rich heritage and make a united front against any individuals who challenge either.

Neki is an alumnus of Guru Nanak Dev Polytechnic University. He immigrated to New Zealand in 1987 and is married to Prabhjeet Kaur Gill with whom he has two sons. He is currently a partner in a grocery store named Bin Inn Glenfield with Chanchal Singh Deol, Baljinder Singh Virk, and Parmpreet Singh Parmar.