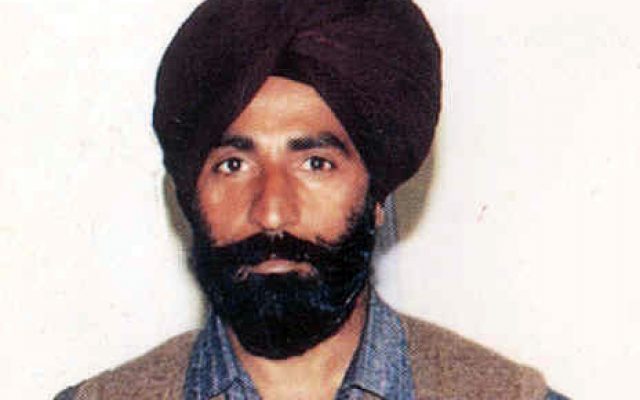 Bhai Sukhdev Singh alias General Labh Singh is ranked in the forefront of warriors for the liberation of Khalistan.

He was born in the village Panjwar in the district of Amritsar and at a very young age had a yearning to learn and practice Sikhi. After finishing his education, he left and joined the Police force. He served in the Punjab Police until the day of Vaisakhi in 1978 when 13 innocent Sikhs were killed by the ‘Nakli’ Nirankari cult who were being sponsored by the Indian Government to divide the Sikhs. General Labh Singh’s spirit further revolted when he witnessed the desecration of Sikh shrines and the brutalities committed on the Sikh youth by the Indian Security forces. He realised that serving in a corrupt and inhuman Police force was not an honourable profession. The spirit of the saint-soldier awoke in him and he went to see Sant Jarnail Singh Ji Khalsa Bhindranwale who had gathered a large following amongst the Sikh youth. Sant Bhindranwale, a socio-spiritual leader was gearing his activities to counteract the anti-Sikh activities of the Indian regime whose aim was to destroy the religious base of the Sikhs and other minorities through state violence and repression. Sant Bhindranwale campaigned for Sikhs to take up arms to defend their faith. Having witnessed the oppression unleashed on the Sikhs, Labh Singh listened to his conscience, discarded his Police career and became actively involved in the struggle for freedom. He joined the flowing ranks of the Saint-soldiers of the Damdami Taksal under the leadership of Sant Bhindranwale and started to bring all those people guilty of human rights abuses to book in true Sikh tradition. It was Sant Bhindranwale who named him Labh Singh because whatever mission he was sent on the Sikh nation profited from.

During the storming of Sri Harmandir sahib (Golden Temple), General Labh Singh was given the duty to protect the side entrance to Sri Akal Takhat Sahib and it was this bunker which inflicted the most damage to the invading forces as ‘General’ Brar of the Indian army has quoted. During the attack, General Labh Singh was arrested and tortured in various jails across India. He was also one of the Jodhpur detainees.

During the storming of Sri Harmandir sahib (Golden Temple), General Labh Singh was given the duty to protect the side entrance to Sri Akal Takhat Sahib and it was this bunker which inflicted the most damage to the invading forces as ‘General’ Brar of the Indian army has quoted. During the attack, General Labh Singh was arrested and tortured in various jails across India. He was also one of the Jodhpur detainees.

On 26 January 1986, a Sarbat Khalsa was held under the guidance of Damdami Taksal at Sri Akal Takhat Sahib and a number of resolutions were passed. The main resolution broke all ties with India and it was announced that it was a goal of the Sikh nation to establish a sovereign Sikh homeland as envisaged by Sant Jarnail Singh Ji Khalsa Bhindranwale. The Panthic Committee was formed to overlook the Sikh struggle and the Khalistan Commando Force (KCF) was instigated to lead the armed struggle for the liberation of the Sikhs from Indian rule. The Khalistan Commando Force’s first Chief General was Bhai Manbeer Singh Chaheru alias General Hari Singh, who was a member of the Damdami Taksal and had been a bodyguard of Sant Bhindranwale. It was General Manbeer Singh who planned an audacious rescue to free his colleagues including Labh Singh from the clutches of the Indian Armed forces. On 6 April 1986, General Labh Singh was being escorted by the Indian Police on his way to a court appearance in Jalandhar when General Manbeer Singh and two other commandos from his unit attacked the Police convoy, killing six security men. This was a real encounter with the Khalsa forces, not the fictional accounts Indian government dreams up to camouflage its brutal regime in which only the Singh’s are killed and the Police don’t even receive a scratch. Thus Labh Singh was rescued from the clutches of the Indian authorities and became even more determined to fight to free his nation from the chains of slavery.

When he rejoined the struggle, not only was he one of the most charismatic of the Sikh fighters, serving as an inspiration to the disfranchised youth. After the arrest and disappearance of Bhai Manbeer Singh on 9 August 1986, General Labh Singh took command of the Khalistan Commando Force. In retaliation for the arrest, General Labh Singh sent out Shaheeds: Bhai Harjinder Singh Jinda, Bhai Sukhdev Singh Sukha and Bhai Mathura Singh to ‘bring to law’ General Arun Kumar Sridhar Vaidya who had masterminded the desecration of the Sri Harmandir Sahib but presided over the mass killing of innocent pilgrims, destruction of 37 other historical Sikh shrines, the looting of the Sikh Central Museum and Library thus depriving Sikh’s of their rich heritage.

After committing these crimes against humanity and destroying thousands of lives, on 31 January 1986, General Vaidya retired for a quiet life in Pune. On 10 August 1986, one day after the arrest of Bhai Manbeer Singh, the Khalistan Commando Force took revenge by killing the Chief of the Indian Army, General Vaidya.

During this time, the support of the Punjabi people was clearly with the Sikh freedom struggle and this was evident from the help and support the public provided. In this time, there was also resurgence in Sikhi with thousands of people being baptised in to the Khalsa fold. Saffron turbans and flowing beards was a clear indication that the Sikh people wanted to demonstrate their distinct identity; even though the flowing beards and saffron turbans were targeted by the Indian security forces.

In 1987, the so called Akali Government brought in the next butcher of Punjab, Julio F Ribeiro as Director General of Punjab Police. He proved to be a tyrant. Riberio was infamous for the bloodshed he caused in Bombay and other cities. He was given a free hand in Punjab to pursue a policy of repression and this he did. He announced a policy of ‘bullet for bullet’ and this literally meant kill any Sikh whom he considered to be a terrorist without giving them a right to a trial (Not that a trial could not be stage-managed by the state given the corruption of the Indian judiciary). This warped man had not learnt from history that the Khalsa armies have fought greater armies tan his and that he would finally meet his match. Realising that the Sikh freedom fighters did not shy away from martyrdom, Ribeiro introduced the infamous Black Cats (State sponsored death squads).

After numerous fake encounters in which thousands of innocent Sikhs had been killed, General Labh Singh decided to give Ribeiro a surprise call. On 2 August 1987, General Labh Singh led a unit of the Khalistan Commando Force to attack Ribeiro at his own Headquarters in Jalandhar. Ribeiro was walking with his wife in the gardens when the Singh’s took aim and attacked him however, the coward fell to the floor and played dead. The Khalistan Commando Force freedom fighters, thinking they had finished the butcher of Punjab, made their escape. This attack left Ribeiro a nervous wreck and shortly after, Ribeiro retired and left Punjab for a safer place. In 1992 he was posted to Romania as High Commissioner. Here too, Sikh units were dispatched to bring him to justice. This action resulted in two Singhs, Bhai Jagroop Singh and Bhai Jaswinder Singh gaining martyrdom. Ribeiro however, was forced to go into hiding and resorted to an imprisonment under tight security.

On 12 July 1988, the time had come for General Labh Singh to complete his mission and become once again with the Almighty. He was betrayed and arrested by a Police snatch squad. They tried in vain to break his resolve in order to get information on the hideouts of his fellow activists. With the grace of Waheguru, he didn’t utter a thing. He became another victim of Police torture and murder.

During the last few years under enormous pressure, hardships, continuous betrayals by certain corrupt ‘Sikh’ leaders, and due to the proper guidance which General Labh Singh, Bhai Sukhdev Singh Babbar, General Avtar Singh Brahma, Doctor Gurnam Singh Buttar and other alike gave the Khalistan movement, errors have been committed and attributed indiscriminately to our brothers in arms. Incipient elements of terrorism, traceable to autocratic tendencies have thus taken form. The culprits of such activity are rarely Sikh armed groups. It is clear the majority of the killings have been by state sponsored in an attempt to halt and discredit the Sikh freedom movement.

Over the past few years there has been an upsurge in the killing of innocent Sikhs and people belonging to other minority groups in India. The murder of innocent civilians is never acceptable and the injustices committed by the Indian regime should not be forgotten. General Labh Singh has become a hero of the Sikh people and a part of village folklore. What is needed today is for the Sikh people to recognise the martyrdom of the thousands of Sikhs whose only dream was the establishment of an independent Sikh state of Khalistan. It is now up to us, the present generation of Sikhs, to break the chains of slavery and keep the torch of freedom burning no matter how much injustices are committed by the Indians against us.