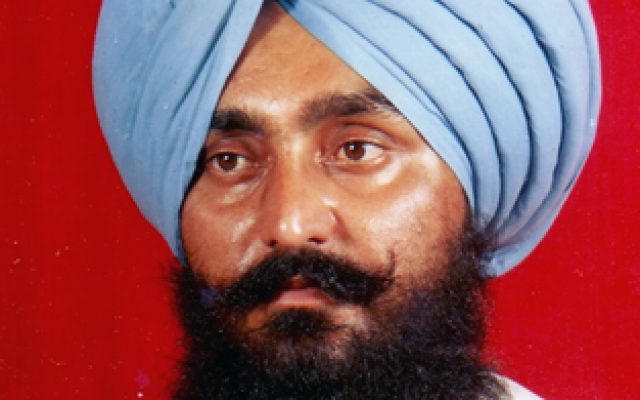 Bhai Jagdeep Singh was born on June 27, 1962 at ‘Roope ka Agwad’ in Purana Moga in Punjab to Sardar Bikar Singh and Mata Jagir Kaur. He had an elder sister – Charanjit Kaur, and a younger brother – Gurmit Singh.

Bhai Jagdeep Singh passed his matriculation from Bhupindra Khalsa Higher Secondary School (Moga) in 1978. He passed his higher secondary in 1979 and in 1981 he completed his Diploma from National Engineering College in Ludhiana before joining Punjab University, Chandigarh for his graduation. In February 1982 Bhai Jagdeep Singh wed Virpal Kaur, daughter of Sardar Harbans Singh at village Khare in Faridkot.

Meanwhile, the Narkdharis (a fake religious sect) had performed the massacre of 13 Singhs at Amritsar with the backing of the Indian government. The Sikhs were restlessly awaiting the time when they could avenge the murder of their brothers. Bhai Jagdeep Singh had became a father of two children – Lovepreet Singh and Ravinder Kaur, but now he was more inclined to fulfill his duty towards his religion than towards his family. Bhai Sahib joined the ranks of Khalistan Liberation Force and worked closely with Bhai Kulwant Singh Khukhrana & Bhai Amar Singh Mann Kishanpura. Bhai Sahib preferred to remain undercover and performed his Panthic duties while still living at home.

In the course of the resistance movement many of Bhai Sahib’s companions attained Shaheedi, this often brought Bhai Sahib in a state of sorrow and he wished that he would be next to attain Shaheedi.

In 1989, the police found out about Bhai Jagdeep Singh’s activities and contribution to the Sikh struggle but before police could arrest him, he went underground. Bhai Sahib performed some great actions while being underground and was considered the right-hand person of Bhai Gurjant Singh Budhsinghwala. Among his companions Bhai Sahib was nicknamed him ‘Vakeel’ (lawyer) as he always backed his talk with logical arguments.

In order to capture Bhai Jagdeep Singh the Police started arresting torturing his family members but the torture on his family could not sway the determination of Bhai Jagdeep Singh. The letter he wrote to his wife while he was underground caused some stir in journalist circles.

It is often assumed that the people who pick up weapons must be very stone-hearted. But this is completely untrue. In fact, in many cases they are the most soft-hearted. When we hear stories of the highest ranked generals in the Sikh struggle, it is amazing to learn that those who performed such huge actions were so much soft-hearted. Bhai Beant Singh, who killed Indira Gandhi, was so much soft-hearted that he would become distressed when his children were sick. That is exactly why he could not bear the sight of massacre of small children in Operation Bluestar and decided to punish Indira Gandhi. Another gentle and tender hearted fighter of the Sikh struggle is known to be Baba Manochahal, who was not able to eat if he heard the news that an innocent person had been killed. It is said that sometimes he used to visit his home at night and as they were asleep, he would pick the sleeping kids up and hug them repeatedly. It was such an emotional scene that anybody watching would have tears in his eyes. There is one such incident about Bhai Jagdeep Singh which shows his emotional side and tender heart. Bhai Jagdeep Singh met his family only twice whilst he was underground. Firstly at Gurudwara Nanaksar (Jagraon). At that time his son Lovepreet Singh was 6 years old. He asked his son to bring him water. The boy went away, taking small steps, and brought back water for Bhai Sahib. Bhai Sahib drank some water and secretly, threw away the rest of it and asked his son to bring some more. When he did this again, for the third time, his wife asked him why he was sending the kid to get water repeatedly if he doesn’t want to drink it. Bhai Sahib replies “he looks so beautiful when he walks with his small steps. I want to see him walking like that to my heart’s content. I don’t know if I will get this opportunity again”

Bhai Jagdeep Singh met his family for the second time when he went to his house with his companions at night. He spent some time with his family and kids for some time and then went away. This was to be their last meet. About 2 months later Bhai Sahib achieved martyrdom.

On November 20, 1990, Bhai Jagdeep Singh was traveling along with a companion when their Maruti car was involved in an accident. The Singhs were armed at the time and stopped a bus going from Moga to Chandigarh and boarded it. Upon boarding the bus the Singhs came under fire from a plain clothed police inspector traveling on the bus. Bhai Sahib anticipated the bus would be surrounded very soon and asked his companion to leave. Bhai Sahib shared his final Fateh with the Singh and attained Shaheed in the fire-fight. The police inspector was also badly injured in the return firing.

As the police arrived they took custody of Bhai Sahib’s body and after his identification, Bhai Sahib’s wife was brought in for confirmation. Bhai Sahib’s 5-year old daughter, who thought that her father was sleeping, walked towards the body but was not allowed to go near the body. The small child kept crying but the police did not allow her to meet her father for the last time and the police themselves cremated the body. The police declared that by killing Bhai Jagdeep Singh, they have cut the right hand of Bhai Gurjant Singh Budhsinghwala.

The letter of Bhai Jagdeep Singh, addressed to his wife, still reminds the freedom fighters and their families of their responsibilities.