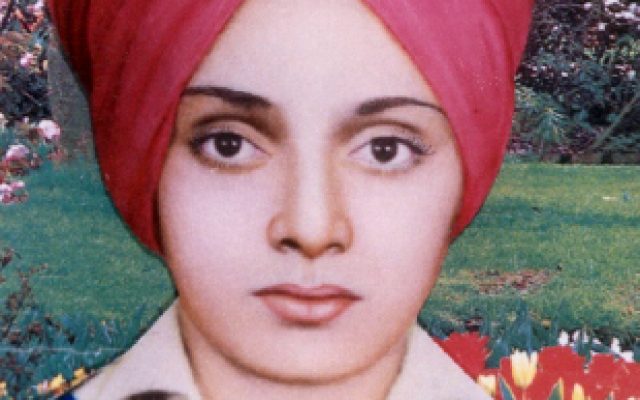 Shaheed Bhai Baljinder Singh Chaunkiman was born into the household of Bapu Gurmail Singh & Mata Dalbeer Kaur. Bhai Sahib at a very young age became interested in Sikh affairs and would often read the Sikh awareness magazines of that time with a great deal of passion. Bhai Baljinder Singh was in the 9th grade when he left school to join the ranks of Sant Jarnail Singh and began to take an active role in the Dharam Yudh Morcha. Bhai Baljinder Singh was very highly influenced by Sant Jarnail Singh. With this the whole atmosphere of the house changed, with Gurbani recitations and Shabads being played non-stop, the household became one with a deep religious environment.

From childhood Bhai Sahib was a gentle, quiet and sensitive natured person. Bhai Sahib could not bear watching atrocities being carried out on innocents. Upon listening to the widely spread audio cassettes of Sant Jarnail Singh’s speeches with regards to discrimination against Sikhs, Bhai Sahib’s developed an intense passion and desire to help the Sikh community and would often discuss this with his friends. Some family members opposed to Bhai Sahib’s views, Bhai Sahib left his home and headed towards Sri Darbar Sahib, Amritsar.

Bhai Sahib came home to visit his family around 10-15 days before Operation Bluestar, but upon hearing news of the Indian Army’s plan to attack Sri Darbar Sahib, Bhai Baljinder Singh returned to the Darbar Sahib complex.

Finally the decisive day arrived when the faith and conviction of the Singh’s was to be tested. Bhai Baljinder Singh was victorious in this test.

A number of Bhai Sahib’s companions narrated to Mata Dalbeer that when fellow Singh’s of Bhai Baljinder were about to leave having decided to surrender to themselves to the Indian Forces, Bhai Baljinder Singh challenged them by shouting “Whilst your father’s house is being destroyed, you are running away like cowards. If you call yourselves warriors and true sons of your fathers, then stick to your guns and continue fighting.”

On the night of the 5th of June, Bhai Baljinder Singh whilst defending the honour of the Sikhs holiest shrine attained martyrdom.

Mata Dalbeer Kaur is facing a number of family and financial problems, Mata Ji told of how one time an organisation provided financial support by giving the family 10,000Rs and that the family was also honoured by Panthic Jathebandis (Religious Organisations) at gatherings at Medhiana & Fatehgarh Sahib. However, Mata Ji stated that she is much happier when her son’s great sacrifice is remembered rather than the need of financial support. Mata Ji provides for her family by sewing clothes as per family tradition.