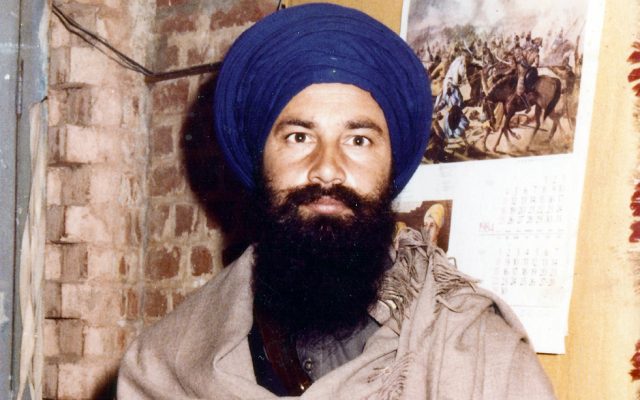 Bhai Amrik Singh (1948-7.6.1984) was the son of (Giani) Kartar Singh Bhindranwale, the chief of the Bhindranwale Mehta Jatha. He had passed his M.A. in Punjabi from Khalsa College at Amritsar. After this he began research work for his Ph.D. thesis. He was well versed in Gurbani and Sikh literature. He devoted much of his life for Sikh missionary activities. Amrik Singh was also one of the Sikh community’s most prominent leaders along with Sant Jarnail Singh Bhindranwale.

He was elected the President of the Sikh Students’ Federation’ on July 2, 1978. In 1979, he contested the election to the S.G.P.C. from the Beas constituency. The Punjab government used all illegitimate means to defeat him. On April 26, 1982 a campaign was started to get Amritsar, Punjab, status as a holy city. It was while campaigning for this that Amrik Singh was arrested on July 19, 1982 along with other members of the Damdami Taksal. Sant Jarnail Singh Bhindranwale began the Dharam Yudh Morcha to free Amrik Singh and other prominent Sikhs. The Dharam Yuda Morcha was also the first collective push to implement the Anandpur Resolution which primarily requested more autonomy for the Sikh people, who were being oppressed and treated unfairly by the Indian government.

When the government of India decided to use lethal force in an effort to assert its authority over the Sikh faith’s most holy shrine, the Golden Temple, Amrik Singh was one of the first of hundreds of Sikhs who gave their life in order to protect the integrity of the temple. He died at the foot of the two Nishaan Sahibs (Sikh Flags) near the Akal Takht.

Along with Amrik Singh and hundreds of other Sikhs who fought against the Indian army’s action, hundreds of innocent women and children were killed by the Indian government in the crossfire. Western observers such as Joyce Pettigrew saw Amrik Singh as one of the Sikh community’s most respected and saintly leaders.