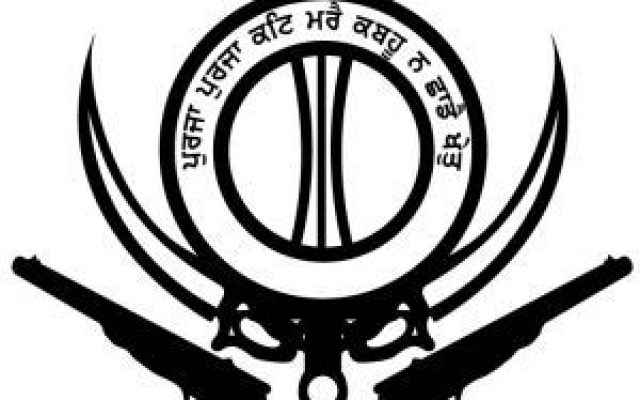 Bhai Sahib went to primary school in Hans Kalan and then went to High School there. Bhai Amarjeet Singh was a very athletic youth. He was an avid field hockey player and was his school team’s captain. Bhai Sahib was also very smart in school and always came at the top of his class. When he graduated in 1988, Bhai Amarjeet Singh secured 72% marks on his finals (a very high mark in India).

During his time in High School, Bhai Sahib was known to be very outspoken. He wasn’t afraid of speaking the truth to anyone. Bhai Amarjeet Singh had even physically challenged the local gangsters. He was always ready to stand up for those being bullied.

After High School, Bhai Amarjeet Singh was accepted into Guru Nanak Engineering College, Ludhiana. It was here he came into contact with Gursikhs and became Amritdhari.

Bhai Sahib began to live a very strict Gursikh lifestyle at this point. He spoke very sweetly to all and loved to listen to keertan. He would wake at Amrit vela and do keshi ishnaan. After naam abhyaas, Bhai Sahib would do his nitnem along with Sukhmani Sahib. After finishing his daily nitnem, Bhai Sahib would go to the Gurdwara and only then would he do anything else. Bhai Sahib stopped attending non-Gurmat events like wedding parties, etc.

Bhai Amarjeet Singh Ji was also a Sarbloh Bibeki Singh. He made a point of always speaking sweetly and with love for all. He was opposed to swearing or speaking harshly.

Bhai Sahib began to distribute Gurmat literature around the area for free and speak out against Manmat practices. At all times, his lips would have Gurbani on them and he would encourage others to become Amritdhari.

Bhai Amarjeet Singh attended rhensbhais by the Akhand Kirtani Jatha very eagerly and at the same time, he was close friends with many Singhs associated with the Damdami Taksal and attended programs organized by the Taksal as well.

Bhai Amarjeet Singh became known as a very dedicated Gursikh and won the respect of those around him. In his days at Guru Nanak Engineering College, the Indian Government was terrorizing the people of Punjab. Thousands of innocent Sikhs had been killed and Gurdwaras desecrated. Bhai Sahib began to think seriously about Khalsa Raj.

Bhai Sahib was attending a local rhensbhai keertan when Bhai Harbhajan Singh Mand of Babbar Khalsa approached him. Babbar Khalsa was an organization of dedicated Gursikhs who fought a principled battle against the Indian State, based on Gurmat. Bhai Amarjeet Singh eagerly offered any assistance he could provide.

While still studying in College, Bhai Amarjeet Singh became to work with Bhai Harbhajan Singh Babbar (Delianvali). He became an expert at secret operations and no one outside a very small group of Singhs knew about his involvement. He would go secretly on missions and then return in time to be an engineering student. No one could guess he was an active Sikh guerrilla.

While doing seva in Babbar Khalsa, Bhai Amarjeet Singh began to take notice of weaknesses in the Sikh Movement. He noticed that some fighters in other organizations had taken to using narcotics and had made links with smugglers. Bhai Sahib summoned a meeting of all organizations to discuss this issue. Local Singhs like Bhai Hardeep Singh Pona, Dr. Darshpreet Singh Rumi, Bhai Mohan Singh Shiekpura attended and agreed to fight this practice.

In the final days of the Sikh Movement in 1992, some Sikh fighters also began to cut their hair to avoid capture. Bhai Sahib was very fiercely opposed to this. Bhai Amarjeet Singh would say:

“According to Sikh history, Singhs like Bhai Taru Singh and many others lived and died with their kes intact. Today, some people who call themselves Singhs are having their kes cut. How can they call themselves Singhs of the Guru? Our Guru had said he would not even give his darshan to those without kes and called such people Bheds (cowardly sheep). These people cannot be Singhs of Guru Gobind Singh.”

Bhai Sahib believed that a true Shaheed was one who died with his Sikhi and rehit intact. If Guru Sahib would not give his darshan to a Sikh with cut hair, how could he accept such a person’s death as a “Shaheedi”.

While still at Guru Nanak Engineering College, Bhai Amarjeet Singh was betrayed by an informant. Bhai Sahib was doing his daily Amrit vela at home when the police party swooped in. Bhai Sahib was arrested and tortured mercilessly. Bhai Sahib quietly bore everything but spoke nothing.

The police then removed Bhai Sahib’s kakaars. Bhai Amarjeet Singh declared that until his kakaars were returned, he would not so much as drink a drop of water. The torture continued and Bhai Sahib remained absorbed in naam simran. The police became frustrated and could not get Bhai Sahib to speak even a word. The police expected him to beg for water as the torture continued, but Bhai Amarjeet Singh continued his jaap and asked for nothing.

On March 11th, 1992, as Bhai Sahib’s body became weaker and still not one piece of information could be taken, the police took him to village Kaneeaa(n) and martyred him in a fake encounter.